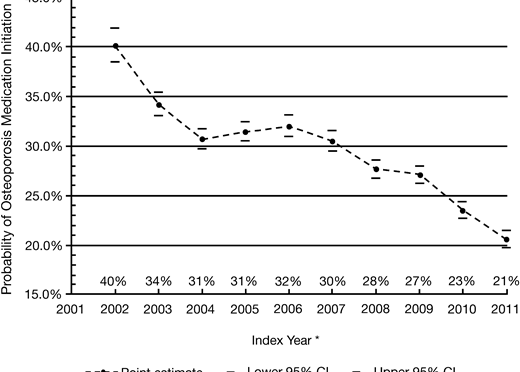 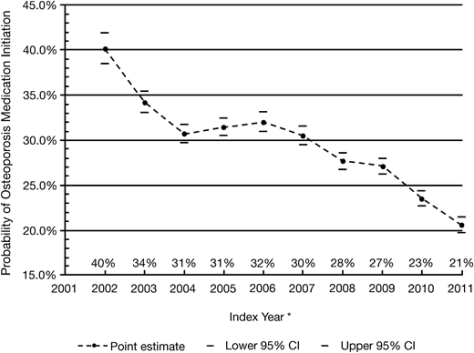 The declining proportion of patients receiving registered pharmacological therapy for osteoporosis after hospitalization for a hip fracture (from P Miller, JCEM 2017).

Imagine that you have just had a myocardial infarction (MI), and your doctor is doing nothing about it. It may be considered a crime. Yet, the majority of patients with a recent hip fracture is not treated! Now, you may say that a hip fracture is not as serious as an MI . Wrong.

Over the past 20 years or so, several effective and relatively safe drugs are available for osteoporosis treatment. These drugs, mostly in the antiresorptive class, can cut the risk of fracture by about half. More importantly, we have high quality evidence that some of these drugs also reduce the risk of death after a hip fracture. The reduction in mortality risk is on average ~28% which is quite substantial.

Because of the increased mortality risk, all patients with MI are treated. And, they should be. However, the situation for hip fracture patients is very different and very disturbing. In a recent analysis, Solomon and colleagues showed that the proportion of treatment initiation after a hip fracture has progressively declined over the period of 2001 – 2011 (3). For instance, in 2002 about 40% of hip fracture patients were given anti-osteoporosis treatment, but in 2011 this proportion had declined to 20% (3). In other words, approx 80% of patients with a hip fracture are not treated. Remember that if these patients are not treated, they are at a greater risk of having another fracture, and more importantly, a greater risk of death.

The problem of undertreatment in osteoporosis is not a new issue. Almost 15 years ago, I already pointed out that more than 75% of patients with an existing fracture were not treated (4). It seems that things have not changed. Actually, it seems to get worse! That is why my colleague, Paul Miller, has timely raised the alarm again in the latest JCEM issue with a very catching title, “Underdiagnoses and Undertreatment of Osteoporosis: The Battle to Be Won” (4). Yes, we have to find ways to improve the treatment uptake among people who are at greater risk of death after a fracture, and that is one of my research mission.