In the previous note, I have already provided some key principles for writing an impact title and an abstract. Title and abstract are two important components of a scientific papers, because they are the first contacts that most journal editors and readers have. Now comes the harder task: composing the paper. In this note I am going to share with you some experience in sketching out key ideas for composing a paper.

A scientific paper is usually structured according to the IMRaD format: Introduction, Methods, Results and Discussion. Although that is the standard format, the sequence of writing is not necessarily in that order. Many experienced researchers think that the Results is where you should start writing, but others suggest that it is better to start with the Methods section because most information of that section has already been written in a proposal. I have a different idea. I suggest that you start off with a sketch of key ideas for the paper; some people call this sketch a ‘micro paper’ (1).

Your micro paper should answer the following questions:

· What is the global / societal / general problem?

· What is the specific and scientific problem?

· What is the hypothesis?

· What are new findings?

· What is the importance of the result?

· What is the scientific / local implication of the finding?

· What is the global implication of the finding? 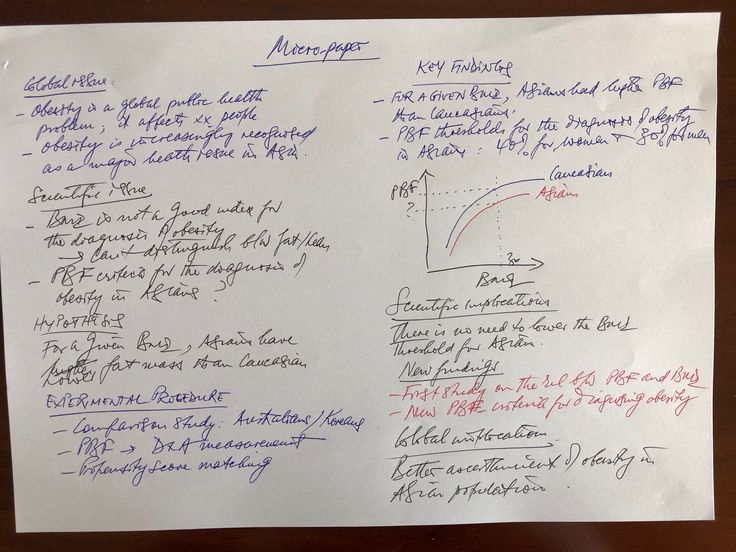 Micropaper: set the stage for writing

In the global problem/issue, you identify a single problem of ‘big picture’ nature. Just one or two sentences will do. For example, in a study comparing the percent body fat (PBF) between Australians and Koreans, I approach the problem from a big picture of obesity as a global public health problem. Obesity is also increasingly recognized as a major issue in Asian populations.

From the scientific problem, I state my hypothesis. There is a call for lowering the BMI threshold for the diagnosis of obesity in Asians, and this call was based on the assumption that for a given BMI, Asians have higher fat mass than Caucasians. However, based on some recent data, I hypothesize that for a given BMI, Asians actually have lower PBF than Caucasians. In other words, my hypothesis is a falsification of the common assumption.

In the “key findings”, I write down two most important findings from the study. First, for the same BMI, Asians indeed had higher PBF than Caucasians. Second, the ‘effect’ was mainly seen in women, not in men.

The micro paper should have one or two key figures. Here, I sketch out the kind of graph that I wanted to present in the paper. I call these graphs “money data”, meaning that they are the most expensive pieces of data of the study.

Then, in the discussion, I sketch out one or two points concerning the scientific importance, new findings, local and global implications of the findings. That should conclude the paper.

So, before writing anything at all, you should find some time to sit down and write down key idea and data for the paper. I normally sketch out my idea and data in a paper (see photo). I don’t like to think in front of a computer screen, because it is highly distracting. With a blank paper and a pen, I can express my thinking on the paper clearer and more emotive.

2 thoughts on “Guidelines for writing an impact scientific paper: set the stage”